“One Piece: Red”, adapted from the best-selling manga in the world, was a hit in French cinemas this Sunday, August 7, for its previews. With nearly 120,000 admissions, it is the best start of all time for a Japanese animated film in France.

This is called a cardboard. This Sunday, August 7, Pathé Films organized a series of previews for the release of the film “One Piece: Red”, adapted from the manga phenomenon. With 119,311 admissions, it ranks first at the box office thanks to a single screening.

119,311 entries made during the wave of previews for One Piece. Superb excitement. @PatheFilms @EuropeToei

As a reminder, “One Pieceis the best-selling manga in the world, with more than 490 million copies sold since the release of the first volume in 1999. 23 years and 100 volumes later, it has been adapted into an anime, for more than 1,000 episodes broadcast in 80 countries and about fifteen feature films.

The work follows the adventures of Monkey D. Luffy, a young boy gaining rubber abilities after eating a Devil Fruit. As he travels, he assembles a crew and goes in search of the “One Piece”, the treasure left behind by the Pirate King.

Best Debut of a Japanese Anime Film of All Time

It is an understatement to say if the release of “One Piece: Red” is an event in France. It is barely the fifth film, out of the fifteen existing ones, to have wide distribution in French cinemas. “Strong World”, the first to be released in France in 2011, only attracted 20,858 spectators. For the other Japanese productions, “Z” (2013), “Gold” (2016) and “Stampede” (2019), the results had not been better.

This Sunday therefore sounds like a little revenge for the fans of Straw Hat Luffy. With nearly 120,000 entries, “One Piece: Red” is already the franchise’s biggest hit in French cinemas. And this, with only one day of previews. That is to say if the success promises to be resounding.

Since the reopening of theaters post-containment, films adapted from manga have been on the rise in the cinema. We remember “Demon Slayer: The Infinity Train“, which had totaled more than 700,000 tickets torn in May 2021. This year, “Jujutsu Kaisen Movie 0” had collected 63,424 admissions in previews, for a balance sheet beyond 500,000.

Thus, “One Piece: Red” will be Wednesday the biggest start for a Japanese animated film in France. Namely that the greatest success of Japanese animated cinema remains “Spirited Away” (2001), with 1,436,845 spectators.

If the success of the film is not to be denied, fans have complained on social networks of the lack of respect from part of the public. In a video posted on Twitter, spectators can be seen jumping on the seats and near the screen, in a cinema in Marseille (Bouches-du-Rhône).

I HAVE NEVER SEEN THIS IN MY LIFE.

Carry on, go ahead. That way we will never have a preview of animated films again. pic.twitter.com/JKCvz45xtS

In a cinema in Mérignac (Gironde), a testimony tells that the fire alarm was activated before the film ended. Contacted by CNEWS, Romain Brilli, manager of Ciné Mérignac, rectifies: “It was something involuntary, someone pressed the wrong button when leaving the room. We will invite all viewers to watch the film again whenever they want.

Especially since a lot of customers spoke very badly to the hostesses on the pretext that they were managing the situation very badly when they had nothing to do with it and that they took 1 hour of their break to be able to reimburse everyone. . Besides, we haven’t found the guy who

While the vast majority of screenings took place peacefully, the debate was revived on social networks on the “turbulent” atmosphere during the previews of films adapted from manga. 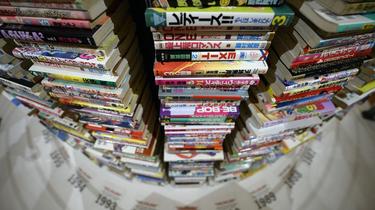 Last March, during the screening of “Jujutsu Kaisen Movie 0” on Great Rex had been obliged to react in a press release, after inappropriate behavior. “There is a difference between sharing joy and doing anything. We will therefore be obliged to react more firmly the next evening. Yesterday’s testimonies indicate that the session at the Rex took place in a good mood between fans.