Her eye never left his for a second…

One Piece confirmed in its most recent chapter that Shanks, the famous yonkou, was aware of the secret of the Gomu Gomu no Mi devil fruit, changing his relationship with Luffy forever.This article will contain spoilers for the latest pirate adventures.if you don’t want to miss everything about the new milestones in Eiichiro Oda’s work, we recommend you read the online version, available on the service of MangaPlus by Shueisha.

Chapter 1054 of Eiichiro Oda’s best-selling manga confirms that Shanks knew much more than what had transpired until now. A brief flashback shows the pirates under his command attacking the World Government ship carrying the Devil Fruit, despite knowing that he was protected by the powerful special agents of the CP9 agency. The sequence even shows a CP9 member taken aback by Shanks’ attack, as that devil fruit “just turns you into rubber.” The flashback sheds one more clue to Shanks’ true intentions, showing the pirate smiling shortly before losing an arm to protect Luffy from a sea monster (which happened in chapter 1) as if he knew that his sacrifice was necessary for the child to fulfill his true destiny. 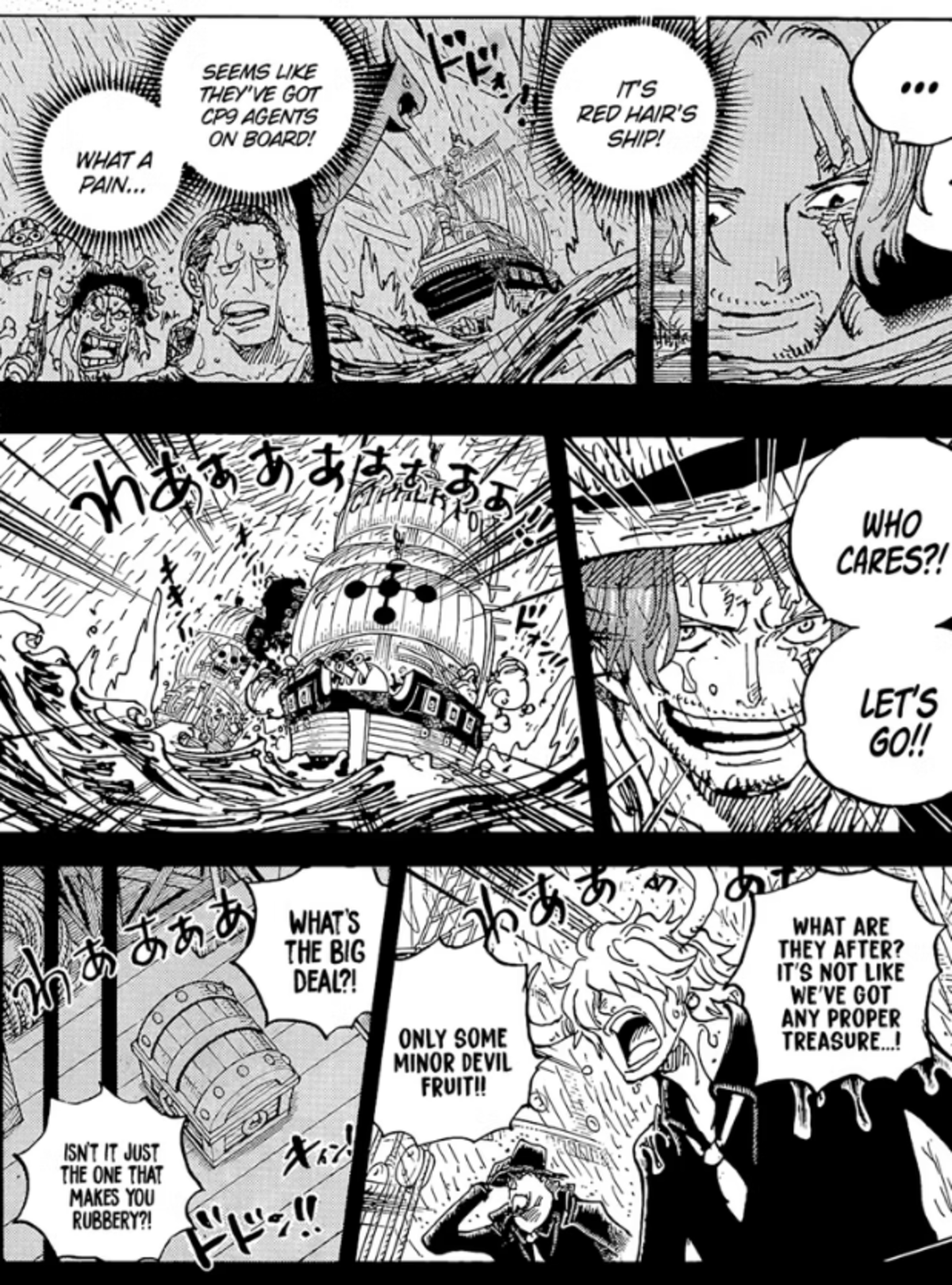 In One Piece chapter 1054, it is revealed that Shanks was always aware of Luffy’s devil fruit secret.

This chapter confirms what fans already suspected, that Shanks was aware of Gomu Gomu no Mi’s secret.. This would also explain why he trusted Luffy, a boy from an unknown town in East Blue, so much to leave him his most prized possession, the straw hat that belonged to the Pirate King, Gol D. Roger. Nika is remembered as a deliverer who brought smiles wherever he went, and this Devil Fruit was consumed, eight centuries ago, by the mysterious Joy Boy, of whom Luffy is now considered the successor. The World Government is afraid of Nika’s legacy because he could overthrow the tyrannical order they established. If Shanks is aware of all of that, it’s just another confirmation that he is one of the key characters in the series, that he holds the answers to many of the mysteries about him.

There is a more sinister question that remains to be answered, and that is whether Shanks actually allowed Luffy to find that devil fruit because he was aware of the boy’s fate as one of the inheritors of the “Will of God”.“, the sworn enemies of the Heavenly Dragons. Considering that Shanks just declared his intention to go claim the One Piece treasure, these questions will most likely be answered when he and Luffy meet again, but this time will be as rivals.

Shanks and Luffy’s fate in One Piece was always sealed

The biggest retcon in One Piece history was made even more interesting by the reveal that Shanks, the man who set Luffy on the path to become a pirate, was aware of the secret of Gomu Gomu no Mi Devil Fruit all along. Fans already speculated that when Shanks stole the Devil Fruit from the World Government, he knew that it was actually much more powerful and dangerous, and the series confirmed this, changing the relationship between Luffy and Shanks forever.

In the first chapter of One Piece, a boy named Luffy accidentally eats a devil fruit that Shanks and his pirate crew had recently stolen, gaining the powers of a rubber body, thanks to the Gomu Gomu no Mi, a devil fruit from paramecia type. Paramecium are considered the least powerful compared to the element based Logia or the rarer, Mythical Zoan. Twenty-five years later, the manga shockingly revealed that Luffy actually ate the Hito Hito no Mi, model: Nika, a mythical Zoan connected to a mysterious figure called “Sun God Nika”, who was worshiped by slaves in ancient times. The World Government, afraid of this Devil Fruit, tried to hide its existence by changing its name, but could not get it.. The last time they tried it, Shanks stole it, but the implication was that he wasn’t aware of its true origins, even if fans doubted it was just a coincidence.