Mihawk is such a lonely pirate that perhaps a great ending could await him in One Piece.

One Piece is made up of a world full of conflicts and secrets, therefore, the characters that we understand as heroes have a fundamental role in the plot -even if they are villains-, since the story is full of interrelated events.

Taking the above as reference, The Shichibukai (also known as the Seven Warlords of the Sea) were part of the Three Great Powers in One Piece.; and these, in turn, were subdivided into the Yonko, the Marines and the Shichibukai, while their mission was to maintain order in the world. The Shichibukai were made up of seven members recognized among the pirates, who were bought by the World Government to serve their interests. In this sense, the government would suspend the pirates’ rewards and grant them greater freedom than other pirates of the same rank in exchange for loyalty.

After the Shichibukai took this attribution too seriously, their victims went to the World Government to make some modifications that would take away their privileges. To make it, Admiral Fujitora was at the forefront to abolish the Shichibukai and in this way he achieved the annulment of the system.

The latter was beneficial in many ways, however, the power also suffered from an imbalance. The solution of the World Government has been to use the Special Scientific Group to replace its work, although there is still no guarantee that this will work. But, after the disappearance of the Shichibukai system, the pirates have once again been targeted by the World Government, which considers them enemies. But one of its most prominent members, Dracule Mihauwk, resonates among the most complicated conflicts for the World Government given its importance. 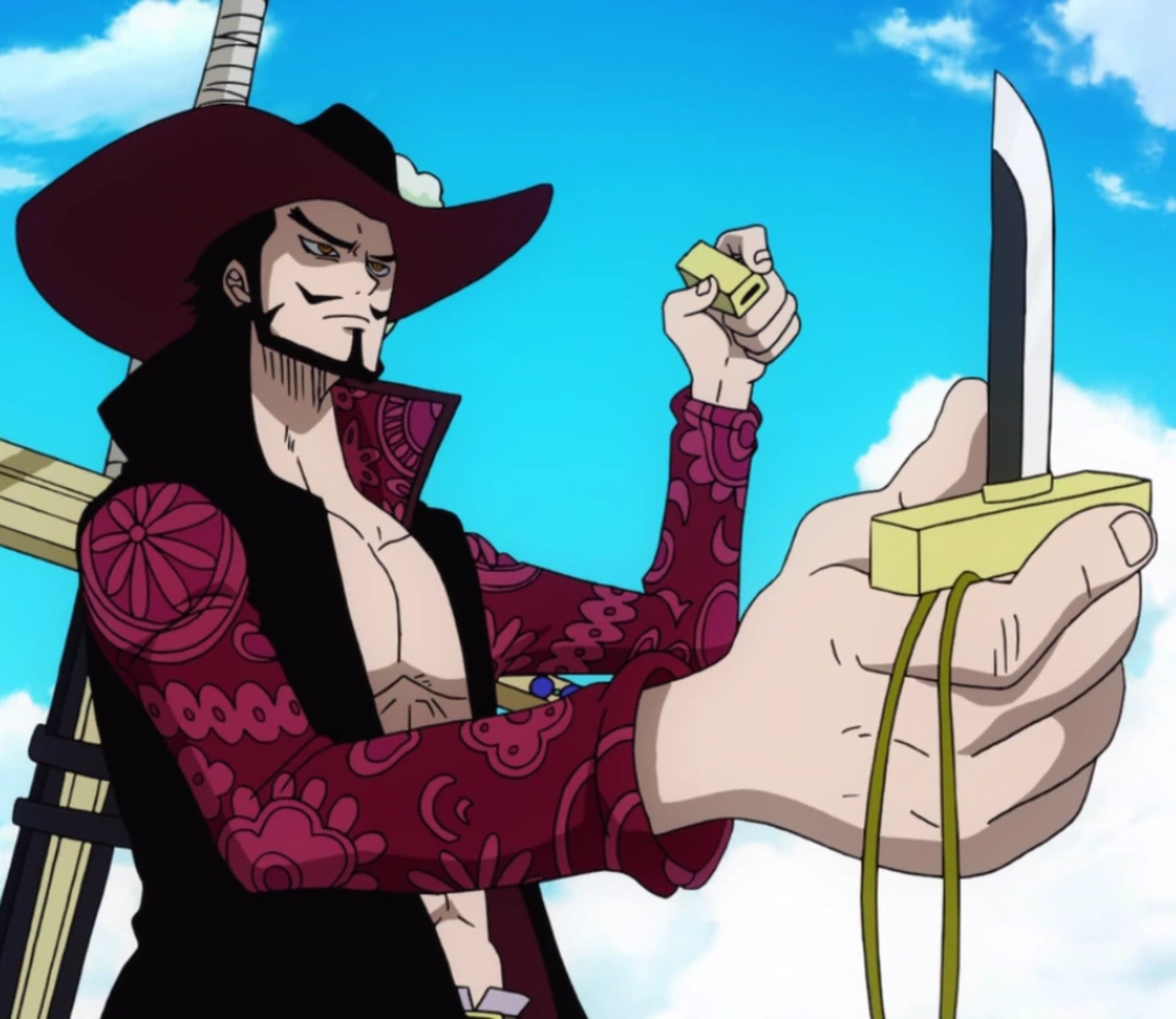 Dracule Mihawk was introduced in the Baratie arc. At first, this character had all the makings of a very serene person. However, his involvement, at the time, was focused on going after Krieg and his entire fleet only to destroy them because they woke him up from a nap. Although it may seem that there is no context behind it or justification, it proves that the first impression about the pirate was wrong.

On the other hand, he also fought against Zoro, and despite the fact that the latter tried his best to win, he was unable to give him a scratch, let alone defeat him. The worst thing is that Mihawk only used a small knife and only at the end did he use his sword to leave a reminder in his opponent’s chest.

Later, the Shichibukai appeared in the Summit War. While the Marines’ plan was to take down Portgas D. Ace -and await Whitebeard’s arrival at Marinefor-, there was a gathering of Shichibukai to ambush Whitebeard’s crew. And, after an arduous battle against various characters, Mihawk showed his great potential.

Thanks to all the feats that the pirate achieved during his fights, earned the title of “World’s Strongest SwordsmanThus, there was no one who could defeat Mihawk when it came to testing his sword skills. The powerful weapon the Shichibukai uses is the black sword Yoru (Saijo O-Wazamono grade), quite unknown. force is such that with a single cut it could destroy a very solid structure.

Previously, there was a rivalry between Shanks -now Yonko- and Mihawk. Between them they probably had the best swordsmanship skills in the world. However, things changed after Shanks lost his arm, since that implied disinterest in his enemy, considering him less dangerous. Although, of course, the extent of Mihawk’s power is not yet known for sure. Will the Shichibukai have a relevant role in the ending?

Yes ok, Dracule Mihauwk has an impressive ability to use his sword and is known for his epic appearances., his life remains a mystery. Especially since there is not much that One Piece has revealed about his past. The only thing that is known is that he has no crew and has always traveled alone.

Of course, the speculations about the character are many. Some of the best known is that Mihauwk could be linked to the Five Elders; while other fans believe he could be Rayleigh’s son. But the truth has not yet been revealed and these statements are nothing more than isolated facts to relate.

In this way, it is likely that if the series has not delved much into the character’s history, it is because there may be an unexpected twist that makes his fans understand why he was hidden for so long. Contrary to other Shichibukai, Mihawk has never been involved in a crucial match, but this actually suited well with his mysterious personality as he doesn’t seek to be a recognized man.

Yes indeed, Mihawk has unfinished business with Roronoa Zoro, since the indications about this began in East Blue. Perhaps this is the starting point for Mihawk to become the focus of One Piece or, on the contrary, he can be killed by Zoro, who would now earn the title of the best swordsman.